The blood test measures levels of a hormone called anti-Mullerian Hormone (AMH), which is produced by the cells in women’s ovaries and is a marker for ovarian function. The test could tell women as young as 20 when they would enter menopause. Sixty-three women reached menopause during the course of the study, and the test was able in most cases to predict the age within about four months of the woman’s actual age; the maximum margin of error was between three and four years. END_OF_DOCUMENT_TOKEN_TO_BE_REPLACED 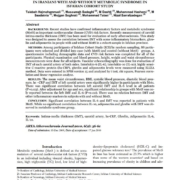