You are here: Home1 / Publication2 / Five-year change in refraction and its ocular components in the 40- to... 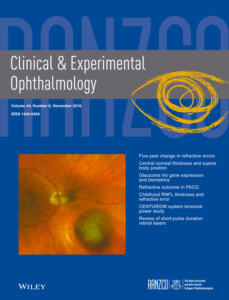 Background: To assess 5-year refractive changes and their related factors in the 40- to 64-year-old population of Shahroud, Iran.

Results: The mean 5-year change in spherical equivalent refraction was +0.24 D (95% CI: +0.22 to +0.25). After 5 years, 4.77% (95% CI: 4.08 to 5.46) of subjects developed at least 0.5 D of myopia and 22.27% (95% CI: 20.97 to 23.57) developed at least 0.5 D of hyperopia. Five-year changes in refraction included a hyperopic shift in all age groups. The greatest hyperopic shift was seen in middle-aged women. The greatest loss of lens power was observed in hyperopic women and the least in myopic men. Nuclear cataract was associated with a myopic shift in refraction. The axial length and the corneal power had very small changes during this period. Myopes showed the greatest increase in axial length. Corneal power increased by a very small amount in all refractive groups.

Conclusions: The most important biometric index related to hyperopic shifts, which were greater in magnitude in women, was loss of lens power, whereas nuclear cataract was associated with myopic shifts.