You are here: Home1 / Publication2 / The frequency of occurrence of certain corneal conditions by age and sex... 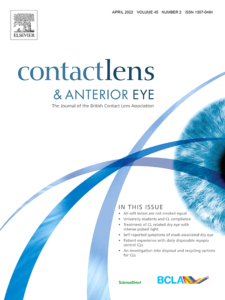 Purpose: To determine the prevalence of posterior embryotoxon, corneal opacity, pigment on endothelium, corneal dystrophy, and corneal vascularization in a middle-aged Iranian population, and their association with age and sex.

Methods: In a cross-sectional study with multistage cluster sampling, subjects were chosen from 40 to 64-year-old residents of Shahroud in northern Iran. Participants had ophthalmic examinations before and after pupil dilation. Corneal abnormalities were diagnosed by an ophthalmologist using a slit lamp.

Results: Of the 6311 invitees, 5190 people (82.2%) participated; 58.6% (n=3040) were female. The prevalence of posterior embryotoxon, corneal opacity, and pigment on endothelium were 14.7% (95% CI: 13.4-16.0), 4.1% (95% CI: 3.4-4.7) and 1.2% (95% CI: 0.9-1.5), respectively, and corneal dystrophy and corneal vascularization were seen in 0.3% (95% CI: 0.2-0.5) and 3.7% (95% CI: 3.0-4.3), respectively. Unlike posterior embryotoxon, the prevalence of all studied abnormalities increased with age after adjusting for sex. The prevalence of posterior embryotoxon (p=0.023) and corneal dystrophy (p=0.038) was significantly higher in women, and the prevalence of corneal opacity (p<0.001) was significantly higher in men. After adjusting for age, sex, and cataract, cases with corneal opacity and corneal vascularization demonstrated significantly worse uncorrected and corrected visual acuity (p<0.001). Conclusion: This report is the first to explore the prevalence of a variety of corneal conditions in a Middle-Eastern population. The findings indicate that one out of five people may have some sort of corneal conditions, and some can impact corrected visual acuity.