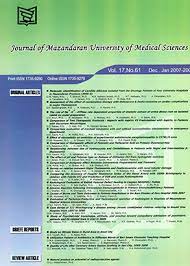 Background and purpose: Red Cell Distribution Width (RDW) is a parameter that measures
changes in red blood cell size reported in a complete blood count test. In this study, we aimed to identify
the association between RDW and hypertension in Tabari cohort population.
Materials and methods: In this case-control study, case group included all patients with
hypertension (n= 2281) participating in Tabari Cohort Study with systolic and diastolic blood pressures
more than or equal to 140 and 90, respectively, or those previously diagnosed with hypertension who
received antihypertensive drugs. The control group was randomly selected from the Tabari cohort
population and matched for sex, age and body mass index. Finally, 2227 people were included in each
group. Blood samples were taken from all participants after 12 hours of fasting.
Results: Findings showed significant differences between the two groups in all variables studied,
including place of residence, level of education, socio-economic status, waist circumference, smoking,
and cholesterol level (P<0.05) except triglyceride level (P=0.111). Independent t-test showed that RDW
in different quarters was not significantly different between the case group and control group. (P= 0.584).
Univariate and multivariate regression tests also did not show a significant relationship between RDW
and blood pressure (P>0.05).
Conclusion: Our study showed that RDW has no predictive role in hypertension and there is no
significant pattern between the range of RDW and hypertension.
Keywords: hypertension, red cell distribution width, Tabari cohort