You are here: Home1 / ICS Publications2 / Carotid intima-media thickness and plasmafibrinogen among subjects with... 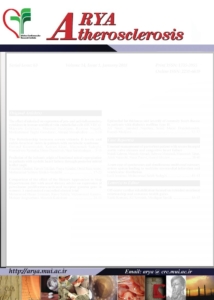 Background: The role of plasma fibrinogen, a key regulator of inflammation processes and increased carotid intima-media thickness (cIMT) to predict metabolic syndrome (MetS) is currently under investigation. We assessed differences in the indicators of cIMT and also plasma fibrinogen level between MetS and non-MetS subjects. We also assessed the role of these two parameters for independently relationship with MetS state.

Methods: The subjects in this cross-sectional survey were population-based samples of 93 men and women aged ≥ 35 years and over who were selected from the Isfahan cohort study, Isfahan, Iran. Fibrinogen was measured by the clotting assay of Clauss. Ultrasound studies of the carotid artery were performed to measure cIMT. MetS defined based on the National Cholesterol Education Program’s Adult Treatment Panel III.