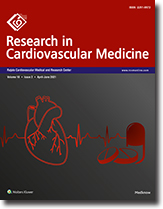 Background: The effects of the risk factors of ischemic heart disease (IHD) and stroke on the occurrence of these diseases differ between different populations.

Objectives: To study the difference in the effects of different cardiovascular (CVD) risk factors on the incidence of IHD and stroke in an Iranian adult population.

Patients and methods: The Isfahan Cohort Study (ICS) is a longitudinal study that followed up 6323 subjects older than 35 years with no history of CVD since 2001. Of the original sample, only 5431 participants were contacted and followed up until 2011. The end points were the occurrence of IHD (defined as fatal and non-fatal myocardial infarction, unstable angina, and sudden cardiac death) and stroke. After 10 years of follow-up, 564 new cases of IHD and 141 new cases of stroke were detected. The relative risks (RRs) of cardiometabolic risk factors such as hypertension, diabetes, hypercholesterolemia, hypertriglyceridemia, high low-density lipoprotein cholesterol (LDL-C) level, low high-density lipoprotein cholesterol (HDL-C) level, current smoking, obesity, high waist-to-hip ratio, family history of CVD, and metabolic syndrome were compared between IHD and stroke patients. The ratio of relative risks (RRR) was calculated for comparing two RRs and estimated adjusted RRR was calculated by using generalized linear regression with a log link and binomial distribution.

Results: The RRs of the occurrence of IHD and stroke in diabetic patients were 1.94 and 3.26, respectively, and the difference was statistically different (P = 0.016). The RR of high LDL-C was significantly higher for IHD than for stroke (P = 0.045), while all the other risk factors showed similar RRs for IHD and stroke, with no significant difference in their RRR, including hypertension. Diabetes and hypertension had the highest RRs for IHD, followed by diabetes, metabolic syndrome, and hypertension for stroke.

Conclusions: The effect of diabetes mellitus on stroke was more significant than on IHD, and the effect of high LDL-C level was more significant on IHD than on stroke, other risk factors, including hypertension, have similar RRs for IHD and stroke. Health care professionals need more training regarding the RRs of these risk factors in the Iranian society, and health decision makers should consider it in their future policies.

Do Cardiometabolic Risk Factors Relative Risks Differ for the Occurrence of Ischemic Heart Disease and Stroke?